For this book I chatted with Bella Tweedale, May Stothard, Bessie Jones, Alice Brook and Irene Baxter who all gave up hours of their time to talk to me about life in the mill during the war, plus Dolly Fitton who was 92 at the time and very generously allowed me to name the character in my book after her, as it seemed so appropriate. There is no better way of getting the feel of an industry, occupation or area than to talk to the people who have lived it. I asked them about their routine and how they acquired their skills? Where did they ache after a long day, and what were the problems and dangers in their work?

Dolly Fitton started in the mill as a doffer at 14, knocking off the filled bobbins, or cops as they were called, replacing them with empty ones. Her real name was Mary Ann but was more affectionately known to her family and friends as Dolly, because she was fairly small. ‘I were the scrapings up off t’mill floor,’ she told me, chortling with glee. ‘Eeh, it were marvellous in t’mill. You could hear them coming a mile off up from the mill. Clattering on the setts,’ she said.

If I’d asked her what she’d had for her dinner she might not have been able to tell me but she recalled the spinning mill vividly. She took me through her day, how the cotton was spun, fleas that were a nuisance, the heat in the mill, and the constant danger of fire. Where and how they had their dinner, and the tricks they used to play on each other in the mill, one being to roll a spindle on the greasy floor and send you flying. She also spoke about how she’d sing in a band as Dolores, and would climb down a drainpipe with her dance frock over her arm, which her mother made for her, so that she could secretly attend. She also mentioned having met Gracie Fields, such a treat. 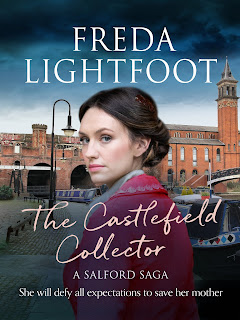 When first published it sold remarkable well and has done so many times since, and received some good comments. Now published by Canelo.

Dolly Tomkins has always known what it is to live hand to mouth. In the mean streets of a Salford struggling under the mantle of the Great Depression, the only one making a decent living is the talleyman.

Though Nifty Jack has a money bag where his heart should be, Dolly’s mam is in hock up to her ears and in dire need of assistance. But when Jack offers to wipe the slate clean, Dolly just can’t bring herself to trust him.

Instead, she takes him on at his own game and in the process endangers everything she holds most dear as a revelation about the past rocks the very foundations of her world.

This is an enchanting story of love and endurance perfect for fans of Nadine Dorries and Kitty Neale. Previously published as Watch for the Talleyman.

Dolly Tomkins put her arms about her mother’s frail shoulders and hugged her tight. ‘It’ll be all right Mam, you’ll see. Dad’ll walk through the door any minute with his wage packet in his hand.’
‘Aye, course he will, chuck.’
They both knew this to be wishful thinking. When had Calvin Tomkins ever put the needs of his family before a sure fire certainty, which was how he viewed any bet, whether on the dogs, the horses, or two raindrops running down a window. And since it was a Friday and pay day at the mill, his pocket would be full of brass, burning a hole in his pocket. Most women hereabouts would be waiting with their open hand held out to collect wages as each member of the family came home on pay day. Maisie certainly did that with the three children she still had left at home: Willy, Dolly and Aggie, but had learned that it was a pointless occupation to wait for Calvin’s pay packet. He wouldn’t give a single thought to his long-suffering wife and daughters, not for a moment.
Dolly studied her mother’s face more closely as she bent to cut the cardboard to fit, and slid it into the sole of her boot. The lines seemed to be etched deeper than ever. Dark rings lay like purple bruises beneath soft grey eyes, which had once shone with hope and laughter, and her too-thin shoulders were slumped with weariness. She looked what she was, a woman beaten down by life, and by a husband who thought nothing of stealing the last halfpenny from her purse in order to feed his habit, his addiction, despite the family already being on the brink of starvation.
Maisie handed the boots to her younger daughter with a rare smile. ‘There y’are love, see how that feels.’
Dolly slid her feet inside and agreed they were just fine, making no mention of how the boots pinched her toes since she’d grown quite a lot recently. They’d been Aggie’s long before they’d come to her, and probably Maisie’s before that, and their numerous patches had themselves been patched, over and over again.
Mending her daughters’ footwear was a task carried out each and every Friday in order to give the boots a fresh lease of life. Dolly wore clogs throughout the long working week, but in the evenings and at weekends when she wasn’t at the mill, she liked to make a show of dressing up. Worse, it’d rained for days and Dolly’s small feet were frozen to the marrow. She’d paid a visit to Edna Crawshaw’s corner shop and begged a bit of stiff cardboard off her, whole boxes being at a premium. This piece had Brooke Bond Tea stamped all over it but that didn’t trouble Dolly; the card was thick and strong and would keep out the wet for a while, which was the only consideration that mattered.