Putting on the Style (Book 1) 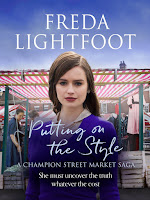 Folk are just emerging from the shadow of WWII and money is still tight. So the vibrant market of Champion Street is a source of many a tempting bargain – as well as all the local gossip.

Dena loves her Saturday job at Belle Garside’s market café, and her ready smile makes her a universal favourite. She is soon in thrall to Belle’s two good-looking and dangerous sons. But fate has other plans in store when her younger brother is killed by a gang of thugs. Only when it is far too late does Dena begin to ask herself one terrifying question: has she fallen in love with her brother’s killer? Bargains galore and life in the raw…

A moving saga of second chances and forbidden love set around a bustling café in 1950s Manchester. 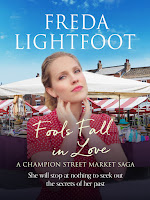 When Patsy talks her way into a job on the Champion Street Market millinery stall, the Higginson sisters get more than they bargained for. Riddled with insecurities, Patsy’s impudence wins her new enemies as well as friends and her determination to solve the riddle of her own past starts to unravel secrets Annie and Clara would much rather keep hidden.

Meanwhile, Molly Poulson hasn’t a care in the world until her two daughters both fall in love with the wrong man. But the more Molly interferes, the more danger looms. Home is where you hang your hat…

An enthralling saga of secrecy and sisterhood set around an elegant hat stall in 1950s Manchester. 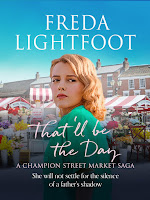 Working on their busy flower stall in Champion Street Market, Lynda and her mother, Betty, have lots of opportunities to observe their customers and speculate about their lives.

Sam regularly buys bouquets for his wife, Judy, so why does she always look so worn out and miserable? Then there's Leo, who comes every week for flowers for his mother, but has never bought so much as a rosebud for his elegant wife. As for Lynda's father, he ran off long ago, so is it any wonder that she has such a low opinion of men? But could all that really be about to change? Flowers spill everyone's secrets…

A gripping saga of gossip and parenthood set around a beautiful flower stall in 1950s Manchester. 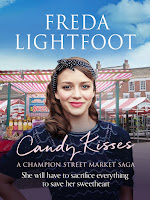 It is a truth universally acknowledged that everyone dotes on Aunty Dot, as much as they do on her homemade sweets. The plump, smiling woman has provided a loving home for many a troubled child over the years, and Lizzie Pringle is no exception.

Lizzie would do anything for her foster mother – even take on local sweet manufacturer and notorious bully, Cedric Finch. Until, that is, she falls for his son, Charlie. Meanwhile, Dena can’t believe that Barry Holmes would hurt her beloved daughter: he’s been like a favourite uncle to the little girl. But rumours are rife and her fears only grow…

Chocolate can also be bitter… 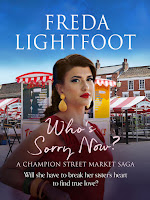 Things are far from simple in the noisy, warm-hearted Bertalone family. Carmina is the quintessential extrovert with beaus flocking to her side like bees round a honeypot – all except Luc Fabriani. For some unaccountable reason, he seems to prefer Carmina's sister.

Gina has always been quiet and shy, the apple of her over-protective parents’ eye, so she believes her sister when Carmina spreads malicious rumours about Luc in an effort to sabotage any blooming relationship. But lies have a habit of unravelling and tangling those who spin them in a web of deceit, as Carmina soon discovers. The question remains: who’s sorry now?

There were never such devoted sisters. A bewitching saga of budding romance and family feuds set around an Italian ice cream parlour in 1950s Manchester. 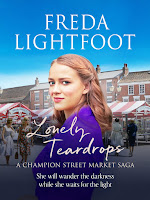 It’s a rainy day on Champion Street as Harriet attends the funeral of her beloved father. But then her grandmother drops a bombshell on her out of nowhere and she can hardly take in the words for shock and grief.

Joyce, the woman she has always called Mam, isn’t really her mother. After all this time, it at least explains why Joyce always favoured Harriet’s brother, Grant. Her emotions in turmoil, Harriet discovers a streak of rebellion that puts everything she holds dear into jeopardy. Can she ever come back from the brink or will her life be full of nothing but lonely teardrops? Blood is thicker than water ...

An emotional saga of love and loss set around a family hair salon in 1950.