Jess’s problems, possessing an abusive uncle and a feckless mother, and with her beloved father away fighting in the war, she felt sorely in need of running her own life. She finally decided to do something positive, but didn’t find it easy to get the band underway.

She also worried if she’d ever be rid of the man she didn’t care for, and eventually find the one she loved and had lost?

Jess had hopes that after they’d run a dance of their own, they might sit up and people would take notice. There’d been little interest from the ballroom managers thus far, but over time she became skilled in creating a strong sense of beat.

They tried to look feminine as well as skilled musicians, and give the audience the glamour they craved. Halter tops, swirling taffeta skirts or slinky ones with thigh high slits. This would often present difficulties with a strapless gown, which would need to be pinned to a bra. It made it harder work trying to battle with inappropriate feminine trappings. A saxophone strap would be cut into a bare neck. High heels were uncomfortable when standing for hour upon hour and they would surreptitiously remove them. The drummer had a pair of flatties handy because of the bass drum pedals. Miss Mona would be under pressure to leave by some ballroom managers, or to spruce up her image and pretend to be younger than she actually is by taking off her spectacles. 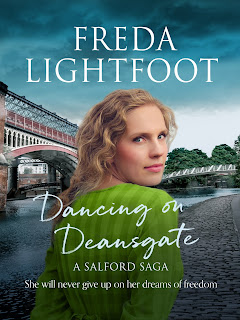 They called it the Christmas Blitz, but there are no festivities for Jess, locked in the cellar by her feckless, tarty mother. And when Lizzie is imprisoned for shoplifting, Jess is sent to live with her uncle, a bullying black marketeer, who treats her like a slave.

Jess’s natural musical talent offers an escape route - and the chance for love. But Uncle Bernie has never forgiven his niece for refusing to join his illegal schemes, and threatens to deprive Jess of her hard-won independence.

‘Women don’t have the stamina that men have,’ said one.
‘Limited scope,’ said another.
‘Women are fine on looks but short on talent.’

This attitude incensed Jess and she would tell them in no uncertain terms that her girls could play In the Mood every bit as well as they could play Greensleeves. ‘We aren’t in the business of employing young ladies who think it might be fun to show off on stage, however charming and genteel they might be.’

One manager had the gall to say that women had no real sense of rhythm in a jam session, as they were hopeless at improvising. Another, trying to be conciliatory, remarked, ‘I see why you ladies are offering to step in, with all the men having been conscripted for service and bands desperate for decent musicians. But we’re looking for professionals, not amateurs. We need the best.’

Outraged, Jess’s response was sharp. ‘We are the best, and how can we ever get to be professional if we’re never given the chance.’

He gave a shake of his head. ‘Women aren’t expected to sit on stage and blow their brains out.’
‘We could blow the men right off it.’

No bookings were forthcoming at the top ballrooms such as the Ritz, the Plaza, or any number of others in and around the Manchester area. They spread their net wider, checking out more modest venues, and finally their first professional booking came. It was at a Lad’s Club in Bury. Jess thought the manager took them on out of pity. He didn’t, however, bill them as professional musicians, but as ‘Patriotic Angels with a Big Talent.’


Dancing on Deansgate is now published by Canelo.

Others coming are:
The Favourite Child
Ruby McBride
The Castlefield Collector