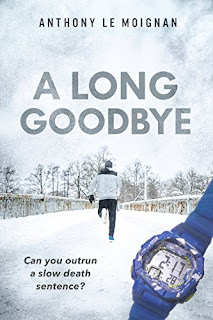 Can you outrun a slow death sentence?

Emma, married with no kids, lives, breathes and manages Orchard Care Home; a position her husband, Michael, used to hold in the good old days. But now he’s soared up the company hierarchy she sees so much less of him.

Simon, a successful accountant, has a big problem. The biggest of them all. He checks himself into Orchard whilst still relatively healthy, the youngest resident by decades. He’s confident he cut all ties with the outside world and is untraceable, but determined ex-partners have their ways...

The attraction between carer and resident is instant, but ultimately destined for catastrophe. Alzheimer’s takes no prisoners and Early Onset, it’s most tragic form, is the cruellest of all.

How can Michael be jealous of this man and his time-bomb? Why does he see Simon as such a threat, driving him to behaviour that will end in disaster?

Simon understands less and less, but knows he has to try and run away from time - to somehow beat the ceaseless clock.

A powerful new novel by Anthony Le Moignan that will make you laugh and cry.

It was both a shock and a delight when Anthony Le Moignan received The English Prize at end-of-term assembly.  He was 11 and in the 6th form, his final year at Prep.

The celebrations carried on for years – five in fact, at which point he was expelled from senior school (‘asked to leave’ was the official jargon).  However, a lifelong lesson was learnt (even if an avoidance of alliteration wasn’t) – he was clearly unemployable.

So through a series of almost absurd luck which he cannot begin to over-emphasise, he seems to have successfully ploughed himself to this current moment in time.

He won’t excuse his love of Cambridge.  Having travelled around the world playing croquet for a couple of decades, this little city is just about his favourite place on the planet.  He’s not entirely sure why, but he seems to love being surrounded by people far brighter than himself, and buildings older than God (welllll, sort of…).

So, a lot of his novels are going to be set in or around Cambridge and London, all of which he hopes will be glanced at in the fullness of time.  For now, he’d like to mention that all of the characters in his books, every single one of them, human and otherwise, are based on actual persons; fragments maybe, but they all truly exist.  Quite how any author can claim otherwise is a complete mystery to him.

Posted by Lindsay Townsend at 00:30