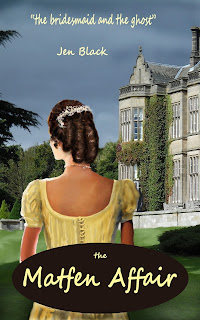 My new book was released mid-February. You may remember

The Craigsmuir Affair
The Gybford Affair
Now we have The Matfen Affair
and I hope you enjoy it.

You may think them a series, but each book is a new story, with new characters, new problems and new locations.

EXCERPT:
Clutching my candle, I headed into the darkness beyond the sharp turn that led to the older part of the house. In daytime, with others nearby, it had seemed romantic, but alone and in near darkness, climbing that narrow spiral stair was like stepping back two centuries. In several places my elbow grazed rough stone. My poor little candle flame flickered wildly in the upper corridor and its light glinted and rebounded from metal shields, axes and pieces of old armour that decorated the walls.
The hairs on my arms rose as I approached the door to my bedchamber. I glanced back the way I had come and thought it was a pity that wood panelling had not been used to cover the bare stone as it would have made the corridor so much warmer. Close at hand, someone sighed.
I whirled round with such speed I almost extinguished my candle.
The corridor was empty. I held the candle high, but saw only the dull gleam of ancient armour. The silence was such that it was hard to believe any other person lived in the house, let alone walked the corridor with me. I took a firm grip of my candle, turned to the bedchamber door, grasped the sneck and entered.


A fire burned in the hearth, and the bright, cheerful glow was a welcome surprise. Relief rushed through me as I closed the door. The maids had lit candles, turned down the bed and laid two white nightgowns on the side nearest the fire. Heaping blessings on their heads, I hurried across the room and crouched before the fire. Heat soaked into me and gradually I forgot the sigh of sound in the corridor.

Email ThisBlogThis!Share to TwitterShare to FacebookShare to Pinterest
Labels: The Matfen Affair

What a wonderfully atmospheric excerpt. You set the scene so skilfully and added drama and a sense of history. Fabulous, Rosemary. xx