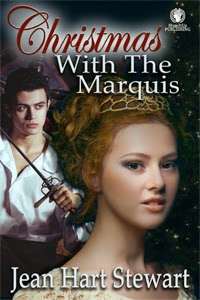 Here's an excerpt from my new release, to formally debut on the 17th. However, it's on re-order at MuseItUp now for a reduced price of $2.99. Now that's a deal!

Abigail called after them. “Galoshes are by the back door. Gloves and scarves also. You don’t want to wear your best clothes on an expedition like this, gentlemen”
She leaned back in her chair and watched them go. Startled, but pleased, she hurried to her own rooms to change into riding clothes and tall boots.  She adored tramping in the woods and how could she not join in the search for the perfect Yule log?   After scarcely a thought she pulled on the breeches she wore when she was riding at home with no one caring what she did. She pulled on her riding boots, although she picked her second-best pair. Who knew what such wonderful snow would do to good boots?
She ran lightly down the steps to the back door. A small screech escaped her when the felt herself hauled against a strong chest, and looked up in astonishment at a livid Jason glaring down at her. Maybe not Jason, right now. No, definitely the Marquis.  An irate Marquis, giving her a good swat on her rear and glaring at her.
“Don’t you even think of trying to escape me, you little fool. You’re not at your country home. You’re at mine, with some of the most licentious noblemen in London who’d be delighted to see you so scantily clothed. Do you want them to line up at your door tonight, you vexatious idiot?”
Abigail simply stared at him for a moment, her temper ready to boil over, when he suddenly softened, ran his hands over her hips and around her waist and pulled her against him.  His kiss was hot and blazing, lingering at her lips with his tongue pushing into her mouth in a dizzying display of passion that had her clinging to his coat lapels.
“My god, Abigail, how am I going to stay away from you?”
He lay his forehead softly against her hair and softly caressed her well rounded bottom.
Stunned, she couldn’t think of a thing to say. She wrenched herself away and fled back to her room. She’d simply not thought of anything but her own comfort and that wonderful snow. Of course a woman didn’t appear in breeches at a house party for London aristocrats! Not unless there was a hunt scheduled or good riding was available.
She was an idiot.
How could she face Jason, and indeed her grandmother? And she herself was supposed to be chaperoning Bettina?
Burying her face in her hands, she tried to shut out her regretful thoughts. The fact that her every thought centered on Jason and his reactions didn’t even occur to her.
She didn’t see the lascivious face of Lord Wilcombe, earl of Wilmington, watching them from a corner of the hallway.

I can be found at all the usual places, plus my own website at www.jeanhartstewart.com
Posted by jean hart stewart at 22:20