All my books, over 30 so far, are set in England. Dangerous takes place in London and the countryside around Dover, where my family of elves have residences. They are all handsome and sexy, and their pointed ears are mostly hidden by long hair, even as I follow the family through generations into the 1950's. Much fun to write about. In the book I just finished (the 1950's) the hero has to keep defending his choice of having hair to his shoulders. But that's a small part of the book. Here's an excerpt I hope you like. 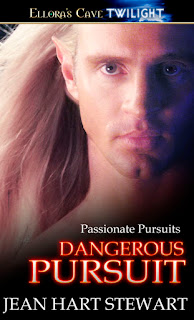 ”Nicki looked at the handsome face slowly descending to hers and knew she should run. Once she let him kiss her, she sensed she’d never escape. Not until he wanted her to go. Ordinarily that thought would have had her scooting out of his reach, trying to protect herself from the heartbreak that would come from loving Vale. Every woman who saw him wanted him. Why should he stay constant to one?


But his eyes were heavy with desire, and she’d never seen anything like their narrow-minded intent. Such beautiful eyes. He was about to kiss her with the passion she’d always longed for, and never expected to find.


She’d fought off groping hands as many nurses had, and she never let herself be alone with Pringly. He’d tried to take her to dinner in spite of the stricture against hospital staff dating. He’d tried to corner her in the hall, in the clean-up room after an operation, even in some of the patient’s private rooms. Always the ones who were too sick to be believed if they reported such an unlikely thing as a doctor raping a nurse. Finally, fearing for her virginity, she’d left the hospital. Although she liked nursing, she didn’t think she’d go back to it as a profession. Genealogy was fascinating, and a much safer occupation for a young woman.


Now she’d found the one man for her, even though her mind told her it was temporary. Vale would be hers only for a brief time, but perhaps she should taste love while she had the chance. Surely she’d never match the intensity of her feelings for Vale with any other man.


Her lips felt hot, her body throbbed in a manner that surely was indecent, but she couldn’t possibly turn her face away from his. Her lower body in particular pulsated as she felt his lower body pressing against hers.  More than anything else she wanted his kiss. His kiss that she knew would open a new world for her. And she craved whatever else he chose to show her. Anything he wanted she wanted. He’d leave her eventually, she realized that, although she strove to smother the thought. Perhaps she could somehow learn to be such a passionate lover he would stay with her for a glorious while.


She never thought she’d allowed herself to be so passive. But he’d become irresistible. His fantastic and alluring looks, his eyes that bored into her very soul and made her feel she was the most desirable woman in the world. Even the way he moved. Like some jungle creature sure of his power and narrowing in on his prey. But his manner did not seem that of an overbearing and arrogant male animal. She thought him above resorting to domination. Never ruthless. He seemed as anxious to please her as she was to please him.


She was completely confused but she no longer cared.”

Many of my books are at Amazon UK. Do write me at jswriter@earthlink.net. I love new friends. Or Facebook. Or Twitter!!!!
Posted by jean hart stewart at 18:22

Thanks, Lindsay. My elves are fun and sexy to boot. What more can you want?