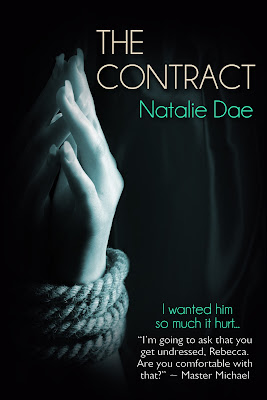 Hey Natalie, it's so good to have you on the British Romance Fiction blog, and what's even more exciting is the fact that your latest release The Contract - which is romping up the Amazon charts as we speak - is set in Oxford a city I know and love. I've read this book and was completely sucked into all of the twists and turns of Rebecca and Michael's story. The time switches were fantastic writing and kept me turning the pages, needing to know more, more, more. It's sexy too, in a dark BDSM way, and completely unique in its plot and characters.  Here's a few questions to give us some inside gossip...

First of all, can you tell us a little about this story?

God, I don’t know where to start! Basically, a woman wants to change her life. She’s fed up of constantly filling her weekends by getting drunk with her friends and feels the need for change. She thinks about becoming a journalist, going to uni and whatnot, so visits a murder trial in session. Her life does indeed change, as she’s dragged into a world where she’s used to do things she never would have—all trial related. She ends up having to go into witness protection, where she’s visited by the defending solicitor, who, during the course of the past she’d fallen in love with, and he wants to heal her, make everything all right again. He does this by mirroring some aspects of the past to help her to understand it isn’t the “things” from the past that have made her frightened but the events. He twins his mission with BDSM—a whip and poker are significant in the past—and eventually she begins to realise that life can be good again.

Most definitely yes. It is very murky in places, what with the baddies, but I’ve always loved writing about the darker side of life, and this book flew out of me, wrote itself really, so I just let it come out as it wanted to.

The Contract has a large part of it set in Headington in the beautiful city of Oxford. Is this a place you have ever visited?

Yes, I used to live there so know the area well. All places featured were so easy to write because I’ve visited them all. I had four of my children at the John Radcliffe hospital, used to work at Kidlington airport, used the bus route regularly etc. I now live in a village in Oxfordshire, which also features in one of my other books in a different pen name, although it isn’t named directly.

How are your fans reacting to The Contract?

Many readers have enjoyed it. There have been a few who have expressed how dark it is, how confusing the plot is. I suppose it might take a bit of getting used to because the timeline flicks from past to present chapter by chapter.

I have been asked by several when I’ll be writing another book like it, so that’s a very good sign, and it has outsold every one of my other books, so that alone is very encouraging. The highest place it reached was #34 on the Amazon Erotica chart, and that was beyond my imaginings. I still can’t get over how it has been received. It’s on sale at the moment until April 30th, so if you want to grab it while it’s cheap…! But I’m toying with the idea of writing Samantha’s story—toying is right, because I’m still not sure on that.

Thanks so much for visiting us today, but before you go can you tell us a where we can find The Contract and your lovely self on the world wide web.

Email ThisBlogThis!Share to TwitterShare to FacebookShare to Pinterest
Labels: Natalie Dae, The Contract