Where is it set?


One of my books, The Gentle Wind's Caress, is set in an area of Yorkshire known as Calderdale. The villages that feature in the book are Hebden Bridge and Heptonstall.

Hebden Bridge is the little bustling village that the heroine of the book, Isabelle, visits to shop and sell her wares on a market stall, but it is the farming countryside around Heptonstall, high up on the moors above Hebden Bride, where Isabelle lives on a run down farm which she tries to keep from going under despite the odds being against her. 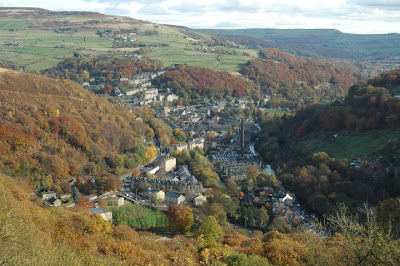 The area is naturally beautiful and running through the valley is the Calder River. This part of Yorkshire, like most areas, is steeped in history, and you can enjoy many local attractions, whether that be sipping coffee in Hebden Bridge, hiking along the many walking trails throughout the valley, learning the villages' history at places like Gibson's Mill (this is also Isabelle's surname, as I've made her a fictional distant relative of the mill owners), or visiting natural beauty spots like Hardcastle Crags.

A snippet from The Gentle Wind's Caress:

The cartwheel fell into a hole, jerking her back to the present. She forced herself to relax. Yes, she had married a stranger, but what had been the alternative? Living on the streets would have been much worse and she had to think of Hughie’s future too.
Isabelle raised her chin and concentrated on her surroundings. They’d left Halifax immediately after the wedding tea and driven straight to Hebden Bridge, where Len stopped to purchase goods, which for some reason, he grumbled about. Now, they drove up the steep, winding Heptonstall Road and her new husband had barely spoken to them. She couldn’t blame him really. Obviously, the situation wasn’t easy for him either. She expected that men become equally nervous as women when they married.
Craning to look past Hughie, Isabelle marvelled at the magnificent scenery of the valley below. The grey stone terrace houses of Hebden Bridge hugged the slopes as though they had been hewn from the valley sides. The silver ribbon of the River Calder coiled through the town like a lazy snake. Beside it, caught in glimpses between trees and buildings, lay the Rochdale Canal.
Familiar names in a new and unfamiliar life.
The muted noise of the small village of Heptonstall greeted them like a soft caress on the wind. The narrow, quiet streets reflected the lateness of the day; many would be inside enjoying their tea. Isabelle took eager interest in the Old Church and Weaver’s Square, and counted seven public houses, but all too soon they left the stone thoroughfare of Towngate and headed northwest on Smithwell Lane and out of the village. She would have to investigate the village properly at a later date.
Isabelle stifled a yawn, she had been awake since before dawn. The day’s toll flagged her strength. She still couldn’t believe she was now married. Opening her eyes wide to keep alert, she surveyed the countryside as it opened up on both sides of the road. The higher they rose, the cooler the weather became and the bleaker their environment. This was moor country. The crisp autumn air awoke her senses. Her gaze lingered on the hues of the heather covered moor. How beautiful it is. Maybe being married and living in the country would be an enjoyable experience. Surely, nothing could be worse than living by Matron’s rules and spending her time hiding from Neville?

To learn more about The Gentle Wind's Caress, which is available in paperback and ebook, visit online sellers such as Amazon, and my Facebook author page. 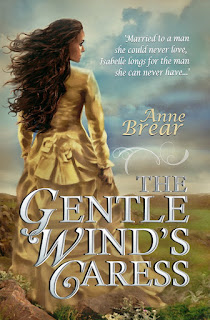 Posted by AnneMarie Brear at 15:06

Ah Hebden Bridge is my neck of the woods - almost. You can see from that picture why they suffer from flooding!! Nestling in a valley like that. I love the cover of your book!