Smut by the Sea – Coming Soon! 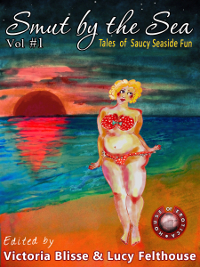 And here's a snippet from Dodging, my own contribution to the anthology:

The thrum of anticipation had been rushing through my body ever since we’d set off that morning. By the time we passed the sign welcoming us to Hunstanton and made our way into the long stay car park, I was almost delirious with excitement. The worst part was, I had to hide it from my friends. As far as Sophia and Chloe were concerned, we’d just come for a nice, fun, girly day out at the seaside. They had no idea about my ulterior motive. And I didn’t intend to tell them. Until afterwards, maybe. I didn’t want to risk them ruining my master plan, or trying to talk me out of it.
So far, it seemed like everything was on our side. The traffic had been light, we’d got a parking space with no trouble, and the sun was shining. It was a perfect day, and I had every intention of putting a cherry on top of all that perfection. A very sexy cherry.
Sophia parked the car, then hopped out to go and get a parking ticket. Chloe and I got out too, stretching our limbs after being cooped up in the car for a couple of hours.
“So,” I said, tilting my head back to catch the rays of the sun on my face, “what’s the plan then?”
“I dunno,” Chloe replied. “I’ve never been here before, you have. What do you suggest?”
“Well, there’s the beach, obviously. There are amusement arcades, mini-golf, the Sealife Centre, a few shops, the old village…”
I deliberately didn’t mention the funfair. That was my destination, and I wanted to go alone.
Sophia rejoined us and put the ticket in the windscreen of the car. “Got everything, girls?”
Chloe and I nodded, and she checked for valuables before locking the doors. “So, do we know what we’re doing yet? I guess we’ll be led by you, Abigail, since you’ve been here before. Did you say you’d visited with your parents, or something?”
I moved away from the car and started to walk down towards the seafront, though purposely leading the girls in the opposite direction to the funfair. They followed without question.
I nodded. “Yeah. We used to come here all the time for family holidays when I was younger, but now we mostly come on day trips. We last came a month or so ago. I was just telling Chloe what there is to do. There’s the beach, amusement arcades, mini-golf, the Sealife Centre, a few shops, the old village…”
“Ooh,” Sophia said, doing a little jump, “I love mini-golf! Do you fancy a game of that before it gets too hot, then we’ll go from there?”
Chloe nodded her agreement, and I said, “I’ll take you there, ladies, but I can’t play.”
“Why the hell not?” Sophia asked. “It doesn’t matter if you’re crap. I’m crap at it too, it’s just a laugh.”
“No, it’s got nothing to do with being crap, Soph. I have a bad back and swinging a club around and doing all that bending is just going to make it worse.”
It was a blatant lie of course. There wasn’t a thing wrong with my back, and I was actually a little gutted not to be having a go on the best mini-golf course I’d ever played on, but missing out was a necessary evil if I was to go through with my devious plan. If it came off, then the result would be a great deal more fun than a round of mini-golf, anyway.
Keep your eye on my website for release information and buy links.

In the meantime, why not add the anthology to your GoodReads to read list?

Also – there's a Smut by the Sea event coming next year. Check out the website for more details. The more, the merrier!
Posted by Lucy Felthouse at 08:00

OOh how many volumes planned?