Whispering Shadows is a romantic ghost story with a mystery, set close to Florence in Italy.  I got the idea for it when visiting one of the many museums there. It was first published by Mills & Boon, later by Severn House, and is now enjoying a new life as an ebook. 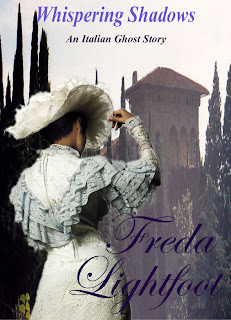 Abigail Carter feels stifled as companion to Emilia Goodenough, and the responsibility of her wayward sister Polly. Then Emilia's nephew, Carl Montegne, sweeps the ladies off to Italy to help him search for the long lost family fortune. But even a romantic castello doesn't stem the friction between them - until the quest suddenly turns to danger, and Abigail discovers the extent of her feelings.

This short extract comes when Abigail is helping Carl to clean and restore his family's castello.

'What will you do with this place?’ she asked, and Carl’s jaw tightened as if she had no right to put such a question.
‘Live in it, what else?’
She stared at him consideringly for a moment, but the question niggling in her mind had to be asked. ‘How could you afford to?’ By the narrowing of his eyes and the white line that formed above the rigid mouth Abigail saw she’d over stepped the boundary of good manners despite her efforts to the contrary. ‘I’m sorry; it really is none of my business.’ He looked so infuriated and yet oddly flattened by her question that she felt guilty and instinctively put out a hand. ‘Forget it. I had no right to ask.’ Desperately she looked about for a diversion. ‘What a very splendid fireplace. And that brass clock is showing the solar system, is it not? How lovely.’
‘My father was born here.’
Abigail looked up at him in surprise. She saw by the tautness of the skin about the eyes the strain he was under, and by the set of his shoulders how he fought it. When he said nothing more she quickly averted her eyes from his face. ‘I dare say they used to cut logs the length of small trees for this dog grate.’ Anything to fill the awkward silence.
Carl was still standing by the vast sideboard, fingering Saturn as if to etch it into his memory. ‘There would once have been pewter and silver plate on this sideboard, majolica from Urbino, and, on the floor, skins and embroidered rugs from the East. A house with money and style, but, I think, very little love. My father, Filippo, ran away from his home while still a young man because he did not get on with his own father, as I in my turn did not get on with mine.’

‘How very sad.’
He shrugged as if it were of no account, yet she knew that was not the case. ‘My grandfather, Guiliano di Montegelo, was said to be very autocratic and had it in mind for my father to marry a rather dull elderly lady who had ample funds but few charms.’ Carl gave the ghost of a smile. ‘My father refused and ran away with my mother, Vittoria, a girl he had known all his life.’
‘How romantic.’ Abigail was staring at the softened face, entranced. But this sensitivity was soon masked and the tone became cool and practical once more.
‘Not in the least. They spent half a lifetime wandering like gypsies, determined not to return here, waiting for the old man to die, so wrapped up in their own needs there was no place in their life for anything or anyone else, not even a small boy.’
‘That’s why they sent you to England, to school?’
‘Let’s say that I was an encumbrance.’ The bitter tone showed how deeply the hurt had scored. ‘But the castle, now that the old man is long dead, and with no other di Montegelo left but me, is now entirely mine.’ There was grim satisfaction in the voice and the dark eyes glittered with purpose. ‘I intend, for the first time in my life, to have a real home. To stay here, in Italy, and build a new life. Whatever it takes to restore this place to its former beauty will be done. I have to do it, do you see?’ He glared at her then, and as he looked into her eyes the gaze softened slightly and he smiled. ‘I don’t mean to sound so vehement, but it is important to me. Can you understand?’
Abigail nodded and came to stand before him, to rest her hands impulsively upon his. ‘Oh, I do. And I’m sure that you will achieve your aim. You can do anything in the world if you want to, my mother always says so, and I believe that, don’t you?’
Carl laughed out loud and, taking her by surprise, wrapped his arms about her, hugging her to him. ‘I wish I could. It is a pleasantly comforting maxim. What a treasure you are. But there was little money with the inheritance, and precious few signs of family artefacts here.’ He sighed, looking about him with a grim resignation, but still not releasing her from his hold. She felt her own breathing move in accord with his. ‘I am not without funds, but this project is going to take all of them and more besides.’
Abigail had both of her hands flat against his broad chest. She could feel his heartbeat, her own seeming to match it as she smiled up at him. ‘I believe you can do it.’ His soft breath whispered over her lips as he looked down into her upturned face. She read a flicker of delight and surprise in his eyes, and something she didn’t dare name.
After a long moment he allowed his lips to tilt into a smile. ‘Every man, they say, needs a woman to believe in him.’ He continued to study her, his hands holding her fast against the hard length of him, so that Abigail could not have moved had she wanted to. Never had she been so close to a man before and it made her go hot and cold all over just thinking about it. ‘I thank you,’ he said, and, reaching down, put his lips gently upon hers and kissed her.
They tasted warm and slightly salty, and as Abigail melted against him she felt his hands curl into her back, gripping her tightly as if a spasm had shot through him. Then it was over and he was giving a half laugh, striding away from her, calling over his shoulder that they would do the rest of the house another day, while Abigail rocked upon her feet, her head in a spin.

You can download a longer sample or buy the book on Amazon:

Lovely excerpt and cover. Lots of luck with this one.