Sue Moorcroft: Being someone I'm not

When I decided to write Love & Freedom, a book about an American woman coming to England to find her English mother, I spotted an obvious pitfall.

I was born in Germany and carted around in the wake of the British army.

But ‘being’ an American can’t be all that hard, right? I see them and their country on my television every day, my brother lives in America, Americans speak English.
I knew that American moms bake cookies and British mums bake biscuits but, quite quickly, I discovered that entire dictionaries have been written on the differences between American English and British English. So I bought one, enticingly entitled Bum Bags and Fanny Packs. And believe me I consulted it.
I realised that I needed an American. 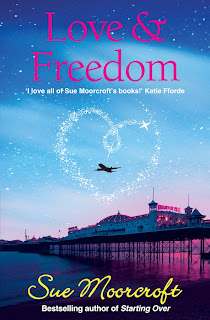 Happily, I met Amanda Lightstone on BBC Radio Cambridgeshire’s In the Chat Room, a programme on which we’re both regulars. It was one of those heaven sent opportunities because Amanda had been born and brought up in America but had come to England and married a British man. I asked her if she’d help with my research – and she agreed. Turning point! She knew the American education system, the culture, the procedure according to passports (happily, like Amanda, Honor holds both US and UK, which makes the work situation feasible), even the differences in traffic systems. She remembered only too clearly how it felt not to know the common names for vital things like painkillers. She gave me insight on how British men seem to outsiders – I was quite impressed – and I used to email her every week with a selection of odd questions. Anything she needed back up on, she emailed to her family back in America.

And then she read the entire manuscript for me and pointed out all kinds of errors I didn’t even know were errors.

I got so far into the heart and head of Honor, using this method, that I’m actually not quite out of it, although the book is written, edited, produced and goes on sale on 1 June. I keep automatically ‘translating’ or thinking about how eccentric English people seem or what a cool place Brighton is. I’ve even been known to exclaim, ‘Holy freakin’ Joe!’ I feel quite proud.

Love & Freedom will be published by Choc Lit on 1 June 2011. You can preorder it now or read the first two chapters. And you can listen to a recording of the FREE prequel chapter here.

All of Sue’s Choc Lit novels and Love Writing are available as ebooks.
Posted by Lindsay Townsend at 08:00

Sue, I know just what you mean! When I was writing my 'West Wing' fan-fiction, I had an American beta-reader who used to correct my British-isms. I got so used to American-isms that I still find myself using them.
Paula Martin
(Blogger won't let me sign in si I'll have to appear as anonymous!)

What is it that draws us to write about things we don't actually have experience of? LOL My first novel was set in New York (I'd never been) was about the mafia (of course my experience of that was huge!) and drugs (nope - never even smoked!) Thank goodness for friends who can help out with the details. Sadly - none of mine were able to help with that first book - so its still in the wardrobe! I didn't learn - the next I set in Bogota. No - not been there either!