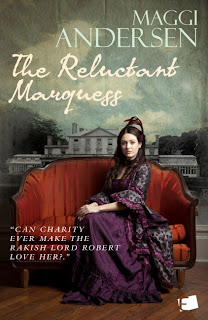 Today we have romance author Maggi Andersen on the blog, with an interview and a blurb and excerpt from her latest release.

Hi Lindsay, thanks for inviting me. Thank you for giving me the opportunity to talk about my latest release, The Reluctant Marquess, coming to Embrace Books on 14th February.

I know you write historical romance. What is it that draws you to the genre?
Although I planned to write contemporary mysteries and crime, I developed a love for historical romance. There's such a wealth of fascinating subjects to draw from for a writer. My historical stories are still mysteries, intrigues or adventurous romps though.  I love to read a good mystery in any genre.


Also, is there a particular period of history that you enjoy writing about? Why is that?
My novels are mostly set in the Georgian, Regency and Victorian eras. I love the interiors, the architecture, the fashion and food, the historical intrigue and the situations my characters can find themselves in. My current wip is about a Victorian explorer.


How do you create your characters? How do you keep them in period and realistic to the age and at the the same sympathetic to readers?
My characters just evolve, it's a mysterious process, but I think it comes from years of extensive reading and a memory of those characters I most loved. Research helps too. If you study an era extensively it comes more naturally to you as you write. Perhaps there's a bit of an actress in me also. I hope my characters appeal to readers. They are basically decent. They might struggle against adversity and the restrictions of the age, or in the case of the spoilt heroes of the Ton, grow through experience - usually with the help of heroines - into decent loving men.


Have you any scenes that you particularly enjoy writing? First encounters for example, or first kiss.
The scenes I enjoy most writing are the ones filled with conflict. I love my characters to have a good argument, filled with sexual tension of course.


How do you relax when you are not writing?
When I'm not writing, I read, go to the movies, have lunch or dinner with friends. I keep fit swimming and do Wii fitness.

Blurb for The Reluctant Marquess, coming to Embrace Books on 14th February.

Blurb: A country-bred girl, Charity Barlow always intended to marry for love like her parents. She suddenly finds herself married to a marquess, her new husband an aloof stranger determined to keep his thoughts and feelings to himself. She and Lord Robert have been forced by circumstances to marry, and she feels she is not the woman he would have chosen to marry given a choice. He makes it plain that marriage is merely for the procreation of an heir, and once that is achieved, he intends to continue living the life in London he enjoyed before he met her. Charity may then return to the country. While Lord Robert pursues his own interests, Charity wanders the echoing corridors of St Malin House, when she isn't thrown into the midst of the clever and mocking Haute Ton. She's not at all sure she likes them, as they live by their own rules which seem rather shocking. She's not at all sure she likes her new husband either, except for his blue, blue eyes, the panther-like way he walks and the hot expression in his eyes when he looks at her that sets her pulses racing. He is a rake and doesn't deserve her love, but neither does she wish to live alone. Lord Robert appears quite willing to do his duty, but Charity demands love and affection nothing else will do. Will he ever love her?
Excerpt: