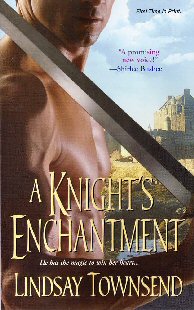 Here's an excerpt from my latest historical romance, 'A Knight's Enchantment.' In it, the corrupt Bishop Thomas demands the impossible from the hero, Hugh. Hugh in return breaks out from the bishop's palace - carrying off the heroine, Joanna.

"What price a man's soul, Hugh de Manhill?" Bishop Thomas answered, pointing at him with a gloved, ring-studded hand. "There are many who speak against the Knights Templar. Word has reached me that your brother has committed many deadly sins of witchcraft and blasphemy."

Hugh laughed. "My brother is the most holy man I have ever known."

"Then your knowledge is sadly lacking," snapped the bishop, "and you are either a fool or a blasphemer yourself. Who else would dare to lay hands upon my own people in my own city?"

You would not have granted me an audience without such persuasion, Hugh thought, but this was too obvious to speak. "How may I make amends for David?"

"Bring me the relics he has stolen! The treasure he has kept from me!"

Hugh had no idea what the bishop was talking about. Keeping his face very still, he tried a second time. "I have gold in abundance."

"And have you also the blood of Saint George? The swaddling cloths of our lord Jesus Christ?" Thomas looked directly at the girl Joanna: a hot and at the same time reptilian glance. "Have you the secret book of the Jews?"

Hugh narrowed his eyes. "On what specific charge do you hold my brother?"

Bishop Thomas flicked a long sleeve at one of the milling dogs, catching the beast across its nose. "Such things as an honest Christian would dread to whisper. He knows."

"Hugh, enough," said David, but Hugh ignored him. David was his elder by scarce two years and they were equal in arms.

"Why do you claim he has such relics?" he persisted, just as Mercury bounced to his feet with another beaming smile and another mellifluous, incomprehensible inquiry.

“The relics. How?” Hugh asked again.

At his brusque demand, the bishop hissed like a disturbed adder and drew back in a swirl of brilliant silk. “It is not for you to interrogate me!” In his sudden fury, his pallid face became even more corpse-like. “Take him!”

But he spoke to air. Hugh had already anticipated the order and reacted. In an explosive series of movements he barged through the guards, hurtled to the eastern wall and grabbed the girl. Whistling to the barking dogs, he slid a dagger from his boot with the speed of a snake's tongue and flicked it to and fro before the bishop’s seething face.

“God’s blood, he has a killing knife!" shouted one man.

"‘Gainst all courtesy and honor!” wailed a priest, crossing himself over and over.

“The hounds blocked us, my lord -”

“ Can no one silence those blessed dogs?” roared Thomas, glowering at Hugh as if he wanted to cast him into the lowest reaches of hell.

Hugh whistled and at once the yammering dogs fell silent, turning trusting faces to him. Other faces, blank with shock, also stared.

“I am leaving now,” he said, ignoring David's murmured disapproval and hauling Joanna off with him as if she were a squirming puppy. “ I shall return tomorrow, with my brother’s weight in gold and, possibly, this girl. Then we negotiate.”

Still brandishing the killing knife and with his back always to the wall, Hugh moved to the door. No one spoke as he motioned the two guards outside the chamber to step within it - although they were two against one, neither was keen to tackle him, even with an armful of girl. No one seemed to breathe as he motioned to the dogs and set them at point in the doorway.

He had hauled Joanna, panting and furiously protesting, halfway down the stairs before a new tumult erupted above their heads, shouts and bodies colliding and pounding feet while Thomas’ voice was raised in loud complaint.

“Get those dogs away! Get after him! Away!”


Carried off under Hugh Manhill's brawny arm like a parcel of clothes, Joanna struggled fiercely and silently. There was no point in appealing to the donjon guards, who rightly feared this brigand, but who also distrusted herself, her father and their alchemy.

But it was humiliating to be so trapped and helpless! Wasting no breath or energy on pleas, she kicked back at her kidnapper, blow after blow on his shins that made her heels ache. Speeding down the staircase at a dizzying clip that was turning her sick, she coiled about in his brazen, hairy arm, trying to break free of his rib-smashing embrace.

Sensing his head lowering toward her, she tossed back her own, seeking to crush his nose. He avoided her attack easily and blew a squelching kiss against the back of her neck.

"No grief to me, Joanna, if I drop you on these steps, but your backside will smart."

His husky voice close to her ear vibrated up and down her spine, making her even more aware of his greater power and strength. Skimming above the stones, flailing out uselessly with her arms as she scrabbled against the tight spiral stair for any purchase, Joanna was tempted for an instant to give in, to twist and rest her aching, bouncing head against his shoulder.

Appalled at her own useless girlishness, Joanna kicked out harder. Manhill merely grunted, stopped on top of the trapdoor on the ground floor, dropped her, and then tossed her over his shoulder. He was striding even faster now, and the half-light of the donjon gave way to sudden, brilliant sunlight.

'You shall not take me!' Joanna bawled, pummeling his back with her fists as her stomach hurt from being squashed against his shoulder-blade and her chin smacked painfully against his spine. There were surely other men in the yard, men whose wives and children she knew, whom she had helped in the past. Surely they would not leave her lolling over this man's back!

Her cry was stifled as Manhill swept her off his shoulder into his arms, bearing her into a shadowed corner beneath some scaffolding that had not yet been taken down from the base of the donjon. There, amidst benches, and planks of wood, workmen's tools and a ripped and dusty old cloak, he set her down, tipped back her head, and engulfed her mouth with a massive hand.

"You will listen!" he said urgently.

She tried to knee him in the groin. He shifted too quickly and took the blow on his thigh, without any obvious discomfort.

"Now you will listen," he growled, giving her a teeth-rattling shake. "I have no interest in harming you."

"As say all kidnappers!" Joanna rasped out behind his hand.

He smiled at that, a brief softening of his lean, tanned face. "If I take my hand away, will you scream? Yes, I think you will," he went on, answering his own question. "A bucking little mare like you will always rattle the rafters with your complaint. So I will leave you here, Joanna, to cry for your loathsome lord, who even now has sent his men to the main gate when I am leaving by the postern. His guards are slack: too much wine and food and easy duty."

Speaking, he manacled her wrists in his other hand, released his numbing grip on her jaw and thrust a woolen glove past her gasping lips. She gagged afresh and he pushed her down onto her knees.

He left her amidst the scaffolding, sprinting for the postern gate while she clawed the glove from her mouth. She tried to yell but her coughing, muted alarm was lost in the greater whirl of rushing bodies as Bishop Thomas' men pounded futilely after their quarry and Hugh Manhill escaped.

To see all my knight books, see my website: http://www.lindsaytownsend.net/
Posted by Lindsay Townsend at 14:05

Very amusing, Lindsay! But with a lot of great color and detail, too.

Thanks, Miriam! I really appreciate it.