Guest blog: Karen Michelle Nutt - Behind the scenes of 'The Devil's Wolf' 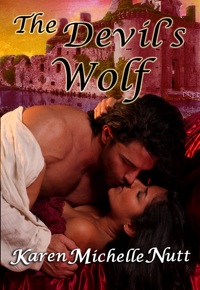 Between the 13th and 17th century, Border Reivers were raiders who lived along the Anglo-Scottish border. These reivers stole from their neighboring clansmen. These clans were both Scottish and English families that raided the entire border country. They were ruthless and did not care who their victims were. Nationalities did not matter.

The Maxwells and the Johnstones

The Maxwells were the strongest family in the Scottish West March until the Johnstones reduced their power in the sixteenth century. The feud between the Johnstones and the Maxwells was the longest and the bloodiest in history. I thought it appropriate to weave a tale around these two clans and perhaps finally bring them peace.

The Devil's Beef Tub is located north of the Scottish town of Moffat with a deep dramatic hollow formed by four hills: The Great Hill, Peat Knowe, Annanhead Hill and Ericstane Hill. The Border Reivers, who hid their stolen cattle there, gave the place its name.

Reivers and Their Names

Many of the reivers had colorful names such as Archie Fire-the-Braes, Out-With-the-Sword, and Cleave-the-Crune. The Devil's Wolf seemed appropriate for the hero of my tale.

Catrione Johnstone and Waylon Maxwell are both fictional characters, but their strongholds were true homes to these clans. Lochwood Tower, the seat of the Johnstone Clan is located in upper Annandale. Unfortunately this historical pele tower is in an advanced state of ruin. Caerlaverock is one of the most beautiful and interesting castle in Scotland. The remains of the castle date back to the rebuilding that took place through 1400s. They offer tours daily.

Excerpt for THE DEVIL’S WOLF

He spotted the old priest, frail and hunched over, already looking defeated despite his attempt at bravery. Waylon’s gaze shifted to the skinny lad standing beside the priest. The youth wore a helmet that nearly covered is face, leaving only his smooth hairless chin as witness to his age. Waylon had to give the lad credit. He stood tall and held his sword like a fearless warrior. Waylon would loathe having to kill him, but if the lad forced his hand there could be no other way.
“Come now lad, the fight’s over,” he coaxed.
The priest's hunched shoulders sagged further and he dropped the dagger he gripped in his hand, but the lad refused to be intimidated.
“It’ll never be over until every last one of you is dead.” He waved his sword in the air as he spewed his threat.
Waylon’s brows lifted. The lad’s voice hadn’t even changed, but it still rumbled like a distant thunder.
“Brave words, I do say, but all within the keep has laid down their weapons.”
The lad hesitated, but then straightened his back. “You lie.”
“Now why would I?” He moved forward with careful steps. He didn’t believe the priest would interfere, but he sensed the lad was unpredictable. “Come now, put down yer sword so we may talk freely.”
“Talk? Do you think I do not know who you are?”
“Who is it ye think I am?”
“The Devil’s Wolf.” He spat on the ground. “You slay all in your path and eat the young for breakfast.”
If the situation wasn’t so grim, he may have laughed. He had heard the rumors, but had ignored them. It was better the enemy feared what they thought he could do than know the truth. “Now, now, is that any way to greet yer new laird?”
“I will never swear fealty to you.”
“Nay? We will have to see aboot that.” He lunged forward, but the lad anticipated his move and blocked it with one of his own. Waylon was impressed. He had underestimated the lad. He thought to disarm him and be done with this charade. “So ye insist on playing, do ye?” Waylon would participate in the lad’s game for a while, but in the end he would win. They paced, each sizing up the other. Out of curiosity to see what the youth had in him, Waylon would allow the lad to make the next move.
He didn’t make Waylon wait for long. He leaped forward swinging viciously, his sword slicing the air with a vengeance. Waylon was forced to retreat as he defended himself from each blow. The look in the lad’s eyes told Waylon his intent. The lad wished to kill him. Waylon swung his sword sending the insolent child back.
The lad jumped onto the wood bench giving him height and an advantage as their swords clanged together. The lad was light on his feet and agile as a cat. Waylon would have to work to put an end to this.
“Come now, ye tire,” Waylon spoke to distract.
“It is you who tires, Devil’s Wolf.” The boy swung his sword again with ferocious intent.
Waylon barely deflected the blow. His eyes narrowed. “Enough! Ye will end this now or I will.”
“Hah! We’ll see who ends what.” And he came after him again.
Waylon backed up, blocking every swing feeling the jolt up his arm. Whoever taught this lad to fight was good. If the lad lived long enough, he’d make a fine warrior. The lad swung again, the tip of the sword slicing through Waylon’s leather jacket hitting flesh.
The lad gasped in shock and stepped back.
Waylon glanced at blood oozing from the cut, a flesh wound only. His pride stung more for allowing the youth to take him unawares. “Now ye’ve done it.” Waylon leveled his gaze on the lad. “We are done here.” He charged the lad, lashing out mercilessly. The lad was wearing down, but he refused to surrender. With swirl of Waylon’s sword he swung up, flipping the weapon from the lad’s grip and pushing him down. Waylon was upon him, his sword at the lad’s throat.
“Stop!” the priest shouted, running forward. “Please, I beg of you do not kill her.”
“Waylon’s gaze riveted to the priest. “What say ye? Her?”
“Do not listen to the old man. He is senile,” the lad claimed. “Do what you must and be done with it. Slit my throat. I am ready to die an honorable death.”
“No, I say,” the priest begged. “Forgive me, my lady.” His gaze turned toward the lad. “I cannot stand by and see you slain.”
“Mi’lady!” Waylon took hold of the helmet that hid the lad’s face and yanked it off his head.
Waves of dark tresses came tumbling out and wide sea-green eyes met his with alarm.
Waylon’s mouth dropped open. He had been about to slash the throat of a mere lass. “By all that is holy, are ye mad?” He yanked her to her feet. His gaze took in the length of her and he reprimanded himself for being so blind. Every curve stood out now that he knew the truth. He pursed his lips together. “The lady Catrione, I presume?”

Karen Michelle Nutt resides in California with her husband, three fascinating children, and houseful of demanding pets. Jack, her Chorkie, is her writing buddy and sits long hours with her at the computer.

When she’s not time traveling, fighting outlaws, or otherworldly creatures, she creates pre-made book covers to order at Gillian’s Book Covers, “Judge Your Book By Its Cover”. You can also check out her published cover art designs at Western Trail Blazer and Rebecca J. Vickery Publishing.

Whether your reading fancy is paranormal, historical or time travel, all her stories capture the rich array of emotions that accompany the most fabulous human phenomena—falling in love.

Visit the author at: http://www.kmnbooks.com

Stop by her blog for Monday interviews, chats and contests at:
http://kmnbooks.blogspot.com

Gillian’s Book Covers "Judge Your Book By Its Cover"
http://judgeyourbookbyitscover.blogspot.com/

I loved the history behind the tale. I read your terrific excerpt with my imagination primed. :)

Thanks so much for having here today to share a tidbit of history and a snippet from The Devil's Wolf. :)

So glad you liked the behind scene look of my tale! Thanks so much for stopping by and for the good wishes. :)

I very much enjoyed the excerpt from your novel and the history you shared. I've only done one British historical novel, TEA LEAVES AND TAROT CARDS, but I did a tremendous amount of research before and during the creation of the Regency romance. So I know yours obviously was hard work and yet a labor of love. Best wishes.

I love doing research almost as much as writing the tale. :) So interesting, but you know this first hand. lol

Thanks so much for stopping by.

I've always been fascinated by the Reivers - I think the word itself is just great. Your book sounds very interesting.

Pleasure to have you here, Karen! It sounds a fantastic story.

I agree, the word reivers is a fantastic name!

So glad The Devil's Wolf sparked an interest. Thanks so much for stopping by for a visit. :)

Thanks again for having me here. :)